FEAR not loyal reader, the prolonged absence since my last post is not indicative of a weakening resolve regarding this project (well it sort of is, more on which in a moment...) and I have been gradually working my way through the small pile of solid-base goodies I have amassed since this blog began. Employment has been intermittent over the last four-or-so months so I have been undertaking some commission painting for a friend to provide those all-important hobby funds. This does of course sadly mean less time for painting my own stuff, but my situation is now improving and I should be back to full-functionality shortly.

Another excuse for my tardiness is that I have had a number of gaming-shaped distractions since December, although all of them have been welcome. This began last November with a friend purchasing the new Necromunda box-set. We've played a fair few games since and I have to say overall I am  impressed with GW's re-imagining of a game we played a lot in our youths, if not with the outrageously gougey manner in which they are releasing it. Needless to say I'm not touching the new plastics ('though they're actually rather nice) and instead have a bunch of 1e Cawdor gangbangers soaking in a jam jar of Dettol as I write. Our group have also got in a few sessions of WHQ since January, never once making it through to the fabled Objective Room - which is precisely as I remember it. Other than that I have also assembled a warband and am building (non-frosty) terrain for Frostgrave, which we did briefly dally with upon its release, but have decided to revisit more thoroughly. I've gone late eighties Citadel for this and will post the models here as they are completed. Oh yeah, I've also got five RT SM Scouts I need to get painted for a RT game at the end of April over at Jamie Loft's manse (he of Old School Miniatures). So nothing too demanding, which is nice. I have some 10mm Copplestone fantasy tucked-away for a future mass-battle project, but that can wait.

RPG-wise things have been quiet since our Black Hack sessions last autumn/winter. I am waiting for Gavin Norman over at Necrotic Gnome Productions to complete all the B/X Essential books (three down, two to go) before launching into a fresh campaign, for which I will use Raging Swan Press's amazing Duchy of Ashlar/Gloamhold setting.

So, that's the situation. Without further ado, on with the minis!

First up we have a pair of C18 Spectres from the First Citadel Compendium (Oct 1983), although the second spook was previously part of the Fiend Factory range as 'FF72 Spectre'. Went for a simple paintjob here, perhaps too simple in retrospect, but hey-ho: they'll do for the table. 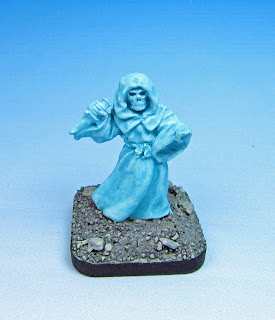 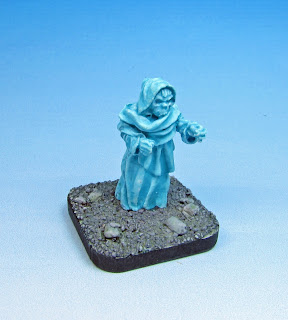 Next up we have nine Skeletons from the Fantasy Tribes Skeletons (FTS) range, sculpted by the Perry bros.. Fiddly little buggers to paint. Earnestly wish I'd used a series of washes and glazes instead of the usual layering, but, again, these look fine on the tabletop - it's just up-close that they come across a bit 'amateur hour'! And at least my Ral Partha Necromancer won't feel lonely anymore! Got this chap primed and based - he'll do nicely as a champion/leader/whatever. As usual your comments are gratefully received. 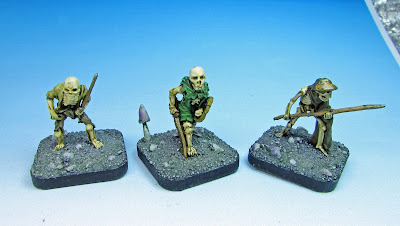 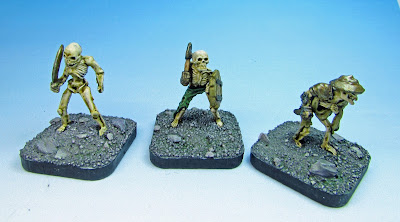 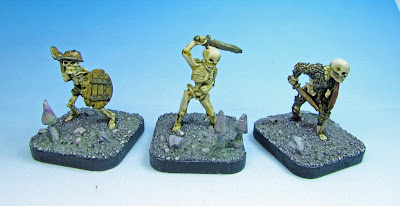 MY first post in December also showcases the first 'evil' miniature I have thus far painted for this project. Without really meaning to I have managed to end up with a fair amount of undead on my painting desk and so decided it would make sense to tackle them together, eventually giving my adventurers a thematically cohesive opponent to tackle. Of course it made perfect sense to start with the head honcho - the necromancer! This is Ral Partha's 'H Necromancer w. Skull', who was sold in the 1982 '98-001 Wizards and Clerics' blister-set alongside September's Cleric. As soon as I came across this splendid model online back in the Spring I knew he was just the chap I was after, although tracking him down at a sane price proved rather more of a challenge (or quest, if you will). Once again the ever-dependable Mike from Broadswords and Beasts blog sprung to my aid and dug the miniature out from what I can only imagine is his considerable lead mountain (I picture a garden shed that unleashes an avalanche of minis every time the door is opened)! Once again - thanx Mike!

I love the Middle Eastern look many of the older Ral Partha magic users evince and our subject is no exception; with his feathered turban it almost seems as if he has stepped straight off the stage of the Aladdin pantomime the am-dram society in the next village are putting on for Christmas! Of course the skull rather upsets this cosy image, instead conjuring up that most classic of cranial scenes from Shakespeare's grisliest play - 'Alas, poor Yorick! I knew him, Horatio: a fellow of infinite jest, of most excellent fancy: he hath borne me on his back a thousand times; and now, how abhorred in my imagination it is! my gorge rims at it.', but hey, he is a necromancer! I'm also putting him forward for Stephen's 'Deadcember '17' competition, which you may read all about here. Do participate if you are able. Fairly certain my offering will be put to shame by all the other excellent entries, but, as they say, it's the taking part that counts! 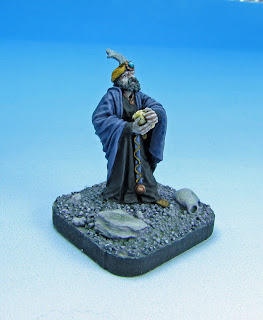 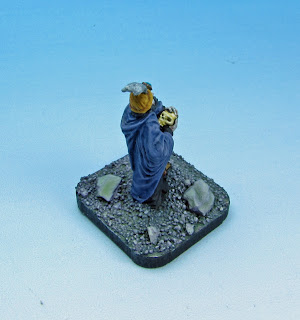 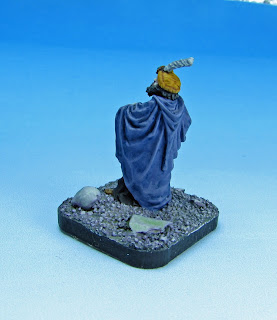 Addendum: An incredibly talented painter called Terry Basset recently posted up some pictures on the 'Old School Miniatures' FB group of a commission he has just fulfilled. It is the 1983 Dungeon Adventurers Starter Set and he's done a terrific job. Head over to his Instagram account and have a gander!
at December 06, 2017 8 comments:

NEXT up is another Asgard Miniatures sculpt from the ever-thickening mists of distant prehistory, or rather 1984 - this time 'DW1 Dwarf Adventurer' from, as with last week's Ninja, the talented hands of Jes Goodwin. I must confess that the '84 Asgard dwarf range, all by Mr. Goodwin, is one of my favourites (stunty-wise) from this or any other manufacturer, including as it does the iconic 'Black Dwarf' and 'Dwarf Lord'. These of course are all still in production and available from the redoutable folk at The Viking Forge. Today's subject is easily as iconic as those just mentioned: a doughty dwarven adventurer heavily laden with bedroll, satchel, helm and shield; we find him between battles as he cautiously wanders the dank, darkling corridors of some forgotten subterranean complex in search of glory and, much more importantly from a dwarven perspective, gold.

Originally I had intended a classic mid-blue/white colour scheme à la the late, lamented Wayne England's Imperial Dwarves, but upon finding that my venerable tub of Citadel Ultramarines Blue had completely curdled had to opt for the next best available option - an equally aged tub of Citadel Hawk Turquoise, which although becoming claggy was rendered serviceable by thinning. Although a compromise I'm actually rather pleased with how it turned out. As usual your views and comments are much appreciated - thanx for looking! 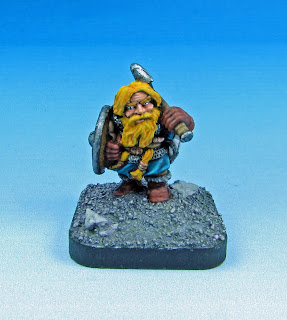 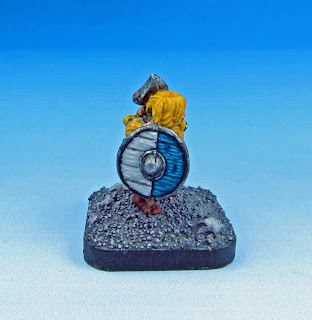 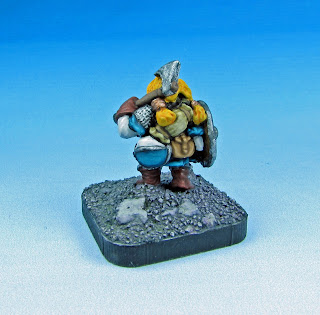 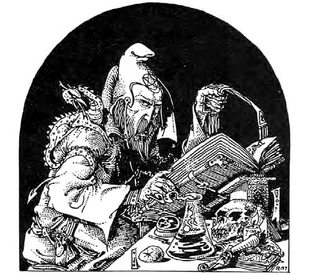 THIS blog is an occasional chronicle of my efforts to collect, paint and game with fantasy miniatures of mostly pre-1985 vintage, along with other pertinent flights of fancy. Further exposition is provided here. Your views and comments are much appreciated.

If you have any olde lead I might want it! Please peruse my WANTS LIST and see if you can make me a happy chappy!